Fourth Win in a Row for SubroSmart at US Captive Awards

We are very proud to announce that SubroSmart was named Subrogation Specialist Firm of the Year 2018 at The US Captive Awards. This is the 4th year in succession that we have topped this category.

A panel of 23 judges from across the captive marketplace recognised SubroSmart as the leading subrogation firm. After the event, the judges commented:

“SubroSmart remains a leader on subrogation services for captive insurance companies, an area still underutilised by the captive owner community. The firm is committed to working with the broader captive industry to educate professionals and firms on how subrogation can improve a captive’s bottom line. The judges were impressed by this valuable approach.” 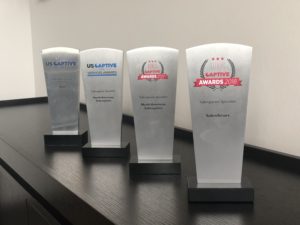 America’s captive insurance industry gathered in Burlington, Vermont, on August 6th to celebrate the annual U.S. Captive Review Awards. This was the largest gathering in the event’s eight-year history. Richard Cutcher, Editor-in-Chief of Captive Review led the evening’s events and handed out awards to members of captive industry across more than 30 categories.

“I am delighted for the whole team that we have won this award for the 4th year in succession. It is their commitment, hard work and desire to deliver service excellence and value to a captive’s bottom line which has been recognized by the judges.”

This website uses cookies to improve your experience while you navigate through the website. Out of these, the cookies that are categorized as necessary are stored on your browser as they are essential for the working of basic functionalities of the website. We also use third-party cookies that help us analyze and understand how you use this website. These cookies will be stored in your browser only with your consent. You also have the option to opt-out of these cookies. But opting out of some of these cookies may affect your browsing experience.
Necessary Always Enabled
Necessary cookies are absolutely essential for the website to function properly. This category only includes cookies that ensures basic functionalities and security features of the website. These cookies do not store any personal information.
Non-necessary
Any cookies that may not be particularly necessary for the website to function and is used specifically to collect user personal data via analytics, ads, other embedded contents are termed as non-necessary cookies. It is mandatory to procure user consent prior to running these cookies on your website.
SAVE & ACCEPT
Submit Your Subrogation